V is for: Veneration 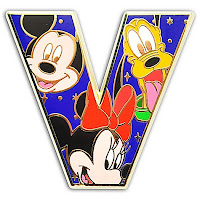 If you love anything Disney, then it's only right to pay homage to the man who followed his dreams and thus feeds ours.  And you'll be glad you did.  Because One Man's Dream, a tribute to Walter Disney at Disney's Hollywood Studios, is not only an interesting walk-through-at-your-own-pace exhibit of memorabilia from the Disney archives, it's a pleasant escape from the hot, crowded asphalt of the park.

My favorite things: the models of the Disney parks throughout the world and the short movie (about 15 minutes) in the comfy theater.  The movie contains never before seen footage of Walt himself and provides a nice little history of how the magical place you're in the midst of came to be.


Disney World Trivia
In what city was Walter Disney born?

Cool! A bit of history mixed in with all the fun.

What a great person. So glad he was around during my time on this earth. I'm waiting for my second childhood to make my first trip to Disneyland. I figure that's about to begin in five years when I turn 70. LOL
Feather

In my opinion, this exhibit should be mandatory viewing for EVERYONE visiting a Disney Park for the first time. The man was a genius, and a visionary! :)

I totally agree! I absolutely love looking at his desk and the models of the parks! Last time we were there they were doing a major renovation of it, and I'm totally excited to see it now!

Aw, that's not nice to compare them to a fungus! ;) Veneration--great word.

...I can remember my kids posing in that same spot! very cool ;)

Okay, I'm going to totally toss out a guess and say Walt was born in either Chicago or Seattle.