'Ello!  If God's plans have aligned with mine, I'm in London right now...most likely sampling the local flavor at cozy British pub.  And I'm raising a pint to Jennifer Lane in celebration of her brand new YA novel, Streamline.

I now leave you in her capable hands for a peek into her book and her research process. And look!  She's including a super cool widget where you can enter to win prizes!  Cheers, Jennifer! 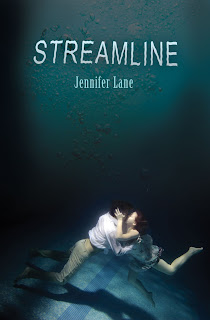 I’m uber-excited for the release of the YA Romantic Suspense Streamline. Nicki, thanks for being part of the Launch Party in absentia!
Seems like Leo Scott has it all: looks, brains, and athletic talent. He’s captain of his high school swim team with a bright future in college and beyond. But Leo has secrets. His mother’s crippling car accident has devastated his family and left Leo to deal with his father’s abuse, battered and alone.

Leo’s girlfriend Audrey Rose is poised for her own share of success. As one of Florida’s top high school swimmers, Audrey dreams of college swimming stardom. But there’s an obstacle to her glorious rise to the top. Her number-one supporter--her father--is in prison for murder.

Part murder mystery, part tale of young love in a military family, this gripping story takes readers on a journey from Pensacola to Annapolis. Leo and Audrey must band together to rise above the adversity they encounter and find their true selves in the process. When everything’s on the line . . . streamline.
Streamline is a story about two US Navy families, taking place both at an air base in Pensacola, Florida and the Naval Academy in Annapolis, Maryland. Since I’ve never served in the military, I needed to research this fascinating world to increase the authenticity of my story.
My grad school roommate became a Navy psychologist, and she put me in touch with a commander who had attended and taught at the Academy. He kindly took the time to teach me about the traditions of “The Yard” such as chow calls in which plebes have to shout the menu for the next meal, events on campus, officers in charge, etc. in rapid-fire mode. He also explained the life of varsity athletes at USNA. I know what it’s like to be a varsity athlete at an NCAA school—an exhausting, thrilling ride—and the Academy ramps up that experience times ten.
Others in the Navy taught me elements that weaved their way into the story, like “Tri-Care” (the health insurance company), psychotherapy confidentiality limitations in the military, and the chain of command. I lucked out when a current “firstie” (midshipman first class, or senior) at the USNA set me straight on training the first-year midshipmen known as “plebes.”
The hot sun bounced off the sea of white uniforms as the plebes
repeatedly rehearsed proper saluting technique. Leo thought his
long-sleeved tunic and round “Dixie cup” hat looked rather dorky
compared to traditional whites worn by the upperclassmen. He knew
Audrey would make fun of him when she visited in August — if he
made it until then.
After they’d practiced saluting and standing at attention for longer
than an invitational swim meet, their company commander explained
the leadership structure of the Academy: the Superintendent was
a three-star Vice Admiral and beneath him, the Commandant of
Midshipman was Captain Sean Tracker. One of Captain Tracker’s
staff members served as the company officer for Second Company:
Lt. Darnell Keaton.
That name sounded familiar to Leo, but he couldn’t place it.
Nevington told them they wouldn’t interact with these officers unless
they’d “screwed the pooch,” so Leo determined never to meet them.
Sour reviewed the Honor Concept of the Brigade of Midshipmen.

Still, this is a work of fiction—undoubtedly replete with intentional and unintentional exaggerations or mistakes. (I’ll take the credit for those!) A big thank you extends to the individuals who shored up my Navy knowledge. I hope you’ll find Leo and Audrey’s navigation through the stormy Navy seas every bit as captivating as I do!

Cool Things About Being Published

My desire to be published stemmed primarily from a perceived need to justify my right to write. Getting published was a way to show that writing wasn't any more of a waste of time than oh, say, golfing, playing poker, or watching endless hours of TV while Brick Breakering.

The ironic thing is, once my book was released to the world, all that glorious writing time I'd justified seemed to disappear amidst the 1001-ways-to-promote-your-book. I'll admit that there have been times when I've resented being published. I often long for the days of fewer distractions.  BUT there seems to be an endless string of happy surprises along the way---cool things that never would've happened if I hadn't come out of my writing closet---that cause me to figuratively slap my ungrateful self and take a moment to bask in the blessing of authorliness.


For example...
Getting to know other writers via the social networks.  Once in a while I even get to meet them in person---this is author Cherie Colyer and I at a local Starbucks, where we met to exchange books & talk up a storm. 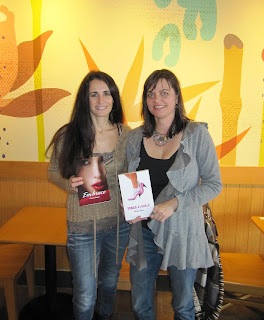 And...
I've been invited to speak at Booth Library on the campus of my alma mater, Eastern Illinois University (on which the fictional campus of Central Illinois University in Three Daves is based) as part of an exhibit on Building Memories: Creating a Campus Community. It remains to be seen whether anyone will show up to hear what I have to say, but still cool, right? 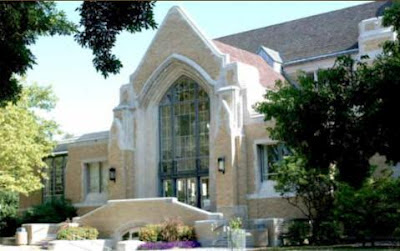 Furthermore...
Sometimes, people even ask my opinions on stuff, like love and intimacy.  Today at Janie Junebug's blog I deliver my incredibly deep and meaningful thoughts on the subject.  It's a private blog, so if you've already received a coveted invitation hop on over and be enlightened.  If you're not yet in the club, Janie has instructed me to tell you to "get off your duff and request an invitation" by e-mailing: dumpedfirstwife@gmail.com

So, what happy surprises have come your way after coming out of your writing closet?

I've had a recurring 80s sighting during the last few weeks: 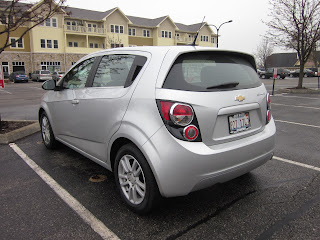 I know what you're thinking. "But...that's the brand new 2012 Chevy Sonic. How could that be 80s?" Let me explain -- it came with with free satellite radio for three months.  So guess who's been cranking the 1st Wave...and taking pictures of her car radio... 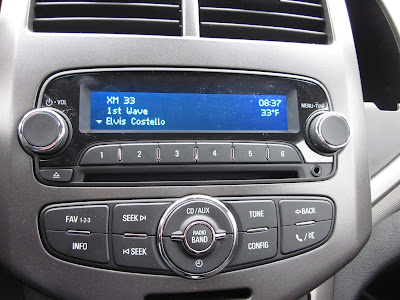 Seriously, does it get any better than new car smell AND 80s new wave?
And now I get to answer some questions about myself after being tagged by The Armchair Squid (a while ago, I know, but "Better late than never" has become my new motto.)
1. What is your dream vacation?

Hm, I'll say an extended stay in the Bavarian region of Germany.  Or maybe Tuscany.  Ooh, but what about Key West?  I reject this question - it's too hard.

2. Are you spontaneous or do you like to plan ahead?

I'm a planner at heart, but I've become comfortable with winging it.

Being old.  I don't want to do it.  Maybe I should take up smoking.


5. If you were stranded on a desert island-what three things would you want with you? (Not including your laptop or family)


6. Name three blessings in your life.

7. What was your nickname in High School?

Veb.  Sadly, that's the only one I can think of.


8. If you could meet the President of the United States, what would you say to him?


9. If you could be any literary character, who would you be?

"He didn't stop Christmas from coming. It came!"


Thanks, Squidward, that was fun!  And thanks, everyone, for stopping by for my nonsense.  It's Thursday, so time for the Author! Author! Blog Hop, hosted by Omnific Publishing.  The other authors probably have something worthwhile to say, so I encourage you to check them out.
Posted by Nicki Elson at 7:30 AM

First off, thank you, Suze, for posting your IWSG early and thus reminding me!  Y'see, I've not been around the blogs much lately, only in sprinklings, cuz I been hit by the triple whammy (as defined by me):

Whammy #1:  New responsibilities at day job + Boss who believes wishing makes it so = It wouldn't be polite to say the combination of words that are the only way to describe it.

Whammy #2: Weekends chock full o' family gatherings are glorious and wonderful...and eat up any hope of catching up with blog friends or making progress on draft #2.

Whammy #3: The very best kind of whammy I can imagine---a trip overseas at the end of the month WITH my daughter to SEE my sister!!!  Nevertheless, it kicks up the pressure to get all my non-blogging, non-writing shite together.

I guess this is my way of saying...not sorry, because I think we all understand that blogging isn't an obligation and can't be a top priority, so how about...I miss you, and I'm so looking forward to getting to spend more time with y'all in April. :)


For purposes of this here support group, I leave you with one question:
What the hell is that in the background of the IWSG icon?
Seriously...what is it?  Alex?  Anyone, anyone? 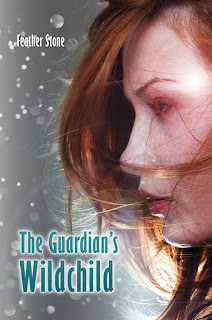 Today author Feather Stone sets sail across the blogosphere to let you know more about her fantastic dystopian romance, The Guardian's Wildchild.  I read this book last year...a few times, actually, as I was the developmental editor...and fell in love with Feather's gorgeous writing and the spirit of this story.

I've read others' reviews and the consensus seems to be that The Guardian's Wildchild is a refreshingly unique book.  For myself I can say that it's not like anything else I've ever read and even several months later, this story resonates with me.

Below is an excerpt of my review on Goodreads, which you can click on to read the whole shebang.  And be sure to stop by Feather's blog today, where our cruise director has lots of fun planned for you.