Yes, yes, I know, it's been a while. I could give you a million and one excuses, but the truth is...I've been dragging my feet on this one. I've had trouble coming up with that quintessential 2010 Big D. The problem could be that I simply don't see enough current movies to know who's out there. Or it could be that there's no one today that's good enough to play perfect, marvelous D. Or it could be—and I think this one is most likely—that my 1980s pick is just so D that no one else will do.
Let's take a look at our boy from the book, shall we?

He's good-looking:
She was looking past Big D’s Greek letters. The way she figured it, any guy who could unabashedly strut around in a form-fitting blue and red polyester jumpsuit—and look good doing it—was worth further examination.

Sweet:
D kissed Jen on the cheek and murmured quietly into her ear, “Thanks for coming today. I’ll call you tomorrow.”

And yes, sometimes goofy:
Jen snapped her attention back to the dancing and desperately searched out D in the bouncing mob. She found him and saw that he’d taken his tie from his neck and had tied it around his forehead.


I'm going to save the best for last and show you my 2010 choices first.  (Much thanks to Anthony Shepard for getting me rolling with some Big D inspiration.)  I've got two actors here for you to examine, and if you have any other suggestions I am open to them. 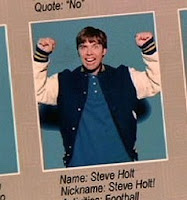 First up, Justin Grant Wade.  You'll know him better as Steve Holt! if you've ever seen Arrested Development.  He's cute, and he's got the goofy-frat-guy-jock thing down.  My concern with him is that he may not be able pull off D's Superman quality.  Then again, all I've got to  go on are images from Arrested Development, so perhaps Justin can pull it off...perhaps.

But just in case, I've got another one here for ya.  Chris Klein.  He's got the Superman, no?  And he can also pull off the sweet, somewhat oblivious popular-guy, as evidenced by his performance in Election (which coincidentally stars Matthew Broderick, my 1980s choice for David.  Kismet?)

If you want the full experience of this particular blog, you've got to get this song playing in the background before you read on: 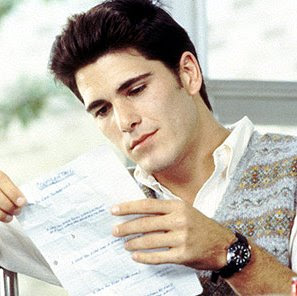 I suppose he has a real name, but I'll be damned if I know what it is.  He was, is, and always will be Jake Ryan to anyone who was a young, impressionable girl at the time she saw Sixteen Candles. 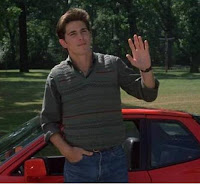 Most especially to my sissy, who stood in braces and a French braid at her big sister's wedding, just certain that at any moment the kind and studly Jake Ryan would appear before her, leaning on his shiny, red Porsche.
Her story ends the same as all of ours—Jake Ryan never showed, and so we make due with what we've been given (although my sister did snag herself a very fine Ryan). Some of us resort to writing novels and creating Jake Ryan-like characters that we name Big D.
Here's one last picture of our perfect specimen.  I've cropped Ringwald out, so feel free to insert yourselves on the other side of the cake, ladies. 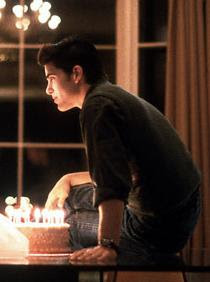 Three Daves Get Around 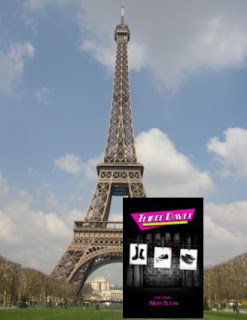 Three Daves has been getting around to all kinds of fun places and I want to see it there!

So if you're taking Three Daves on vacation, to the local world-renowned (or not) landmark, or for a spin on your Harley---anywhere at all---snap a photo and send it to me, and I'll add it to the photo gallery at my website.

If you don't have the book with you, but you've managed to wrangle three actual Daves together, I'll post those too!

You can either post your photo at the "Three Daves by Nicki Elson" page at facebook or e-mail your image to elson.nicki@gmail.com.
Posted by Nicki Elson at 9:37 AM