Happy May! I hope all of your Aprils were good. It snowed twice during April in my neck of the woods. TWICE. But still, it was a pretty good month. Writing took a bit of a backseat as I prepared to have the family over for Easter brunch.

I did get to write some fun clues for the marathon Easter egg hunt, though. Here are the hunters nearing the mother lode of eggs: 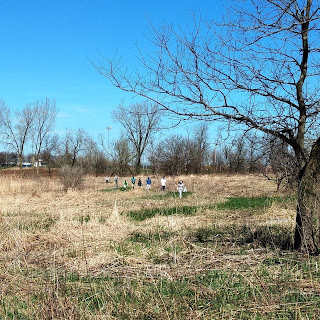 And my kids and I had a super fun time getting the Brookfield Zoo practically all to ourselves on the latest snowy day. We made good friends with this little fella below. Click on the image if you want to see him going nuts chasing my daughter's mold-o-rama. 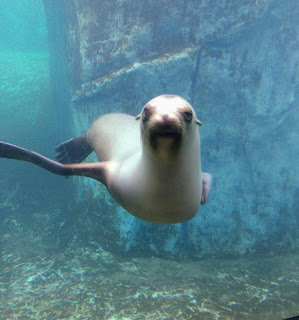 Also, I wrote a big fat newsletter for the boutique department store where I work. That always does a pretty good number on sapping my creative writing energy - but I like to think it's primed me for getting back to it. I mean, I do have to be pretty creative at fitting all the requests of eight different buyers and managers into the limited space they're each allotted.

Which brings me to the point of this month's post. So, you know how you can edit and edit and then edit again and still have errors in your manuscript? Pretty embarrassing, right? Well, it happens to all of us, and next time you want to beat yourself up for it, just bear in mind this snippet from the Autumn 2018 newsletter that I wrote and edited. The error wasn't caught until after it had been dropped at the post office to go out to over 40K readers...

Surely, whatever typos you have cannot be as bad as THAT one. Like, seriously, of all the sentences that could've been cut off, it had to be that one? Award winning, folks. Award winning.

I'll have you know that the rest of the sentence was there when it was handed off to the printer (virgin bloody mary mix, btw) but something shifted during formatting and I failed to catch it when I signed off on the proof. It's taken me pretty much until now to be able to laugh about it. Luckily, my boss laughed right away. *phew*

Wishing you good writing and hilarious typos - that you catch before your work goes public!