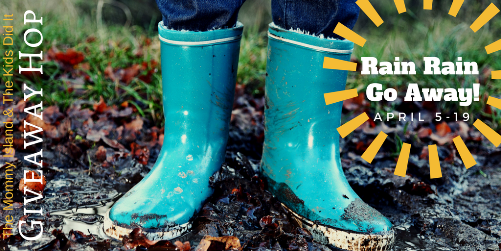 Welcome to the latest giveaway hop hosted by The Mommy Island & The Kids Did It.

What's a great way to spend a rainy day? Why, curled up with a good book, of course! So the giveaway at my blog today is a $5 Amazon gift card. You'll find lots of great books there. ;)

From now until Friday, April 21, you can download my chick lit/romance When It Hits You absolutely FREE at Amazon. 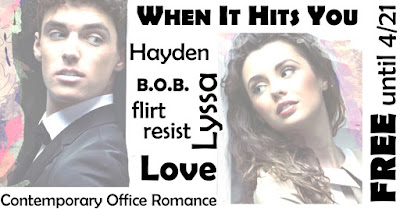 What is it about rain that sparks the imagination? I'm not usually flowery with my writing, but while pulling excerpts from my newest series, I noticed that introducing rain into a scene seems to inspire fantasy-like imagery. Below are three excerpts to show you what I mean:


Rainy Day Excerpt from WHEN IT HITS YOU


Lyssa lay on the high, overstuffed bed with the blankets clutched to her chin, her heart thudding against her ribs. Pounding rain had started twenty minutes earlier, waking her from a light sleep. Every few minutes, an electric show of lights glittered through the thin openings on either side of the window shade. Each crack of thunder that followed was louder than the last.

When in her apartment, Lyssa enjoyed a good thunderstorm, but in this musty place where time stood still, it was pure Psycho. She shut out thoughts of shower stabbings and insane proprietors…only for abandoned hotels and Jack Nicholson axing down her door to take their place.

Grabbing the flashlight from the side table, she shot its beam around the room, hoping to amuse herself with its dancing pillar until the storm calmed. The light caught on the filaments of a web above the closed door. She hadn’t noticed it earlier. Focusing the beam there, she admired the glossy weave and thought about how charming it was to be sharing the room with a tiny spider. A shadow at one edge of the web intrigued her. Sitting up and leaning forward revealed that it was the webmaster. And it wasn’t little—it was huge and hairy…probably hairy, though she couldn’t make out that kind of detail.

She snapped off the flashlight, cutting the vision of the monster, but that only made it grow bigger in her imagination. She flicked the light back on to find that spidey was on the move. Still spinning? Yes, of course. That made perfect sense. It wasn’t a coincidence that the arachnid had set up camp above the door, and the reason she hadn’t noticed the web earlier was because it hadn’t been there. The creature had been lying in wait, biding its time until she was asleep so it could spin its trap over the door.

Good God. If this investment career doesn’t work out, I should try writing B horror flicks.

Rainy Day Excerpt from WHEN IT HOOKS YOU


Rain fell in slick, black sheets. Only the murkiest glimmer of moonlight soaked through the cloud cover, leaving the world in muted shadow. Two faraway streaks sliced through the black, casting a glare and igniting the magical realm surrounding them. Emerald occupants of the jungle stood with their heads forced down by the relentless pelting, bowing to the slate giants in the distance—majestic kings crowned in amethyst. The vision only lasted a few short seconds but stayed imprinted on Trish’s brain.

“Wow,” was her lame attempt to describe the scene. Adam’s awed silence did a much better job of it.


Rainy Day Excerpt from WHEN IT HOLDS YOU


The forest filled with screeches—coming from the humans who zoomed above it. A gazillion shades of green blurred below Cliff while feathery rain licked his face. His chest opened wide, soaking it all in and giving his wildly pumping heart room to dance. Moments after he landed on the next platform, Trish touched down with a delicate hop, her eyes sparking with exhilaration. Lyssa and Hayden also arrived flushed from the thrill.

They jumped again and again. Cliff found slower stretches of the rope course to be even more incredible than the fast ones, allowing him more time to admire the exotic, misty scene. Its serenity was electrified by darting birds shaded in all the colors of the richest rainbow in Oz. He was young and wild and free in the trees. Invincible. 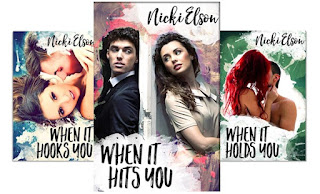 How about you? Do you ever find that rain inspires you to new levels of creativity?

My giveaway for the Rain, Rain Go Away Hop is a $5 Amazon Gift Card.
I am solely responsible for providing this prize.

Hop around to the links below for more great prizes!

The Insecure Writers Support Group has started a Book Club at Goodreads! The club is all about honing our craft as writers, so visit the page to learn more and join.

The 2017 A to Z Challenge is on - good luck to all of those participating!  This month's optional question for the IWSG is: Have you taken advantage of the annual A to Z Challenge in terms of marketing, networking, publicity for your book? What were the results?

I'm not participating in A to Z this year since I knew I couldn't commit to daily blog visits, but I've had great fun completing the challenge in the past. I have to be honest and say that I've never looked at A to Z as a marketing opportunity for my books or even as publicity to increase my blog following. I just did it because it was fun. I usually think it's a blessing to not take myself too seriously, but the flip side of that is I often don't take myself seriously enough, and I know that holds me back from achieving all that I could.

BUT I am totally serious about giving away my book for free later this month. If you'd like to help me spread the word, please join my Thunderclap. Thank you!