Congrats @taratylertalks on the release of Broken Branch Falls!

Today is the release of Broken Branch Falls by Tara Tyler!! I was the lucky winner of an ARC duirng the cover reveal, so I was able to read it early, and oh my goodness what delightful story it is. I can't even tell you how many times I laughed out loud at Gabe the Goblin's hilarious inner thoughts. (I'll save my full 5-star review for my August 1 blog tour post.)

This is a fantasy story written for a Middle Grade audience, so I'm not sure what it says about me that I enjoyed it so much---actually, I think it says more about Tara's writing that it can be so eagerly devoured by adults as well as kids. Such great adventure mixed with lighthearted teenagery angst.

Gabe is an average fifteen-year-old goblin. He’s in the marching band, breezes through calculus, and gets picked on daily by the other kids at school, especially the ogres. Gabe’s closest friends are goblins like him, but Gabe is tired of being a goblin – he’d like to try other things. And he has his eye on the new ogress at school. It’s against all beastly rules, but there’s just something about her.

When a prank goes wrong, Gabe is forced to join the football team as punishment – but finds a way to make it work. Soon the whole school is getting in on the rule-breaking fad of mingling with other species. Too bad the adults have to step in and ruin things by threatening to destroy the school and split up Broken Branch Falls. And Gabe is their scapegoat. With help from friends, old and new, Gabe sets out on a quest for a relic of their mysterious past, which hopefully holds the key to saving Broken Branch Falls. After all that trouble, it better work. 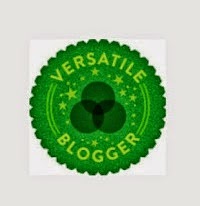 The marvelous and loveable Janie Junebug has given me an award! The Versatile Blogger Award. I looked up versatile in good ol' Merriam-Webter, and here's what I found:

As I am capable of both (1) and (2), I shall hereby accept this award in good conscience. All I have to do is tell you seven things about myself. Prepare to be fascinated...

1. My favorite job ever was being a lunch lady at my kids' school.

2. I can't STAND to leave my toenails unpainted.

3. I complain about bunnies eating my plants, but truthfully I like it (I figure it's repayment for all my enjoyment of their cuteness).

4. There's only one show on TV that I must watch: Survivor.

5. I've watched every single season of it.

6. And I'm chuffed when people who've never watched a full season get all snootyish about it.

7. I wish Google, Facebook, Apple, and Amazon would stop vying to take over the world and each just stick to doing what they're truly good at.

I am now to tag 15 more bloggers, and I choose to tag the first 15 people to comment here. But please don't let that discourage you from commenting!  If you'd like to be immune from making an acceptance post, simply state "I found the hidden immunity idol" in your comment. :) 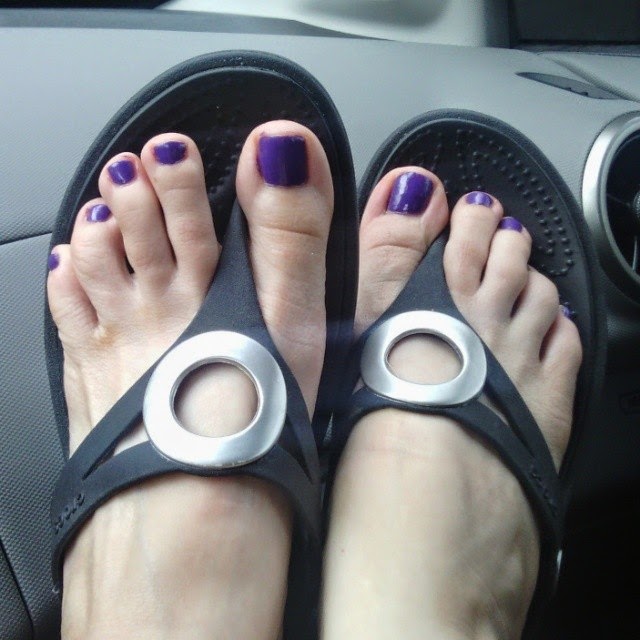 19 comments
Email ThisBlogThis!Share to TwitterShare to FacebookShare to Pinterest

Then and Now: The Sure Thing 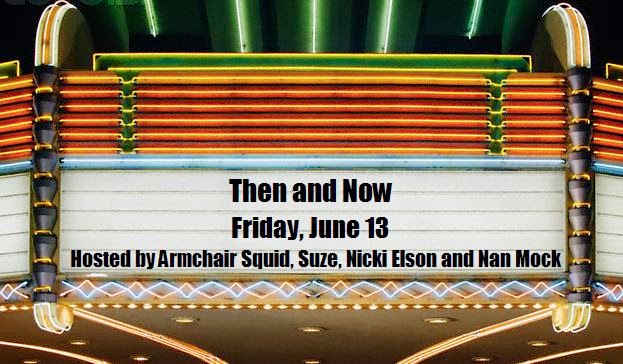 Today is the the "Then and Now" blogfest, hosted by Armchair Squid, Suze, Moi & Nancy Mock. Squid & Suze were the instigators, and I thank them for letting me tag along. The idea of this here hop is to reflect on a movie that meant something to us at an earlier stage in our lives and explain how we view it differently now.

Before I jump all the way into my post, I want to apologize to visitors of my Insecure Writers post last week. I appreciate all of your lovely comments for Carol, and I'm sorry that I haven't been able to repay your visits yet. Y'see, right after I got that post up, I had to pack my bags and make a road trip for my daughter's college orientation. I know! I can't beleive she's leaving me either. Anywho, it's crazy what just a few days away from everything can do to my good intentions. But I still have them, and I'll see ya very, very soon.

The time on a college campus was fun and totally gave me a hankerin' for my undergrad days (apparently writing Three Daves didn't quite get it out of me). It also helped me to finally land on which movie to focus on for this post...

I loved this movie in the 80s and I love it now. But I have come to see the male lead, Walter Gibson, a/k/a Gibb, in a different light. Back then he was perfect, the kind of guy who would keep his woman laughing and laughing and happy forever. As I said in my Grown Ass Man post last fall, I've learned that Fun Guys aren't always so fun. So while I'm glad the Gibster helped remove the giant stick that was stuck up the leading lady's arse, I no longer imagine that the two of them will make the perfect couple forever and ever. I imagine his jokes growing old and her moving on to someone more mature and more serious, someone more like herself.

Not that he won't mature over time, but I guess what I don't believe in anymore is that people can or should change for each other. I'm not saying that two people have to be exactly alike to be compatible---the differences can be what keeps a relationship interesting into old age, and every successful relationship requires compromise and learning from each other, but I don't know...too much of the growth in The Sure Thing relationship seemed to depend on her becoming more like him and him becoming more like her instead of them each being who they were and appreciating what the other was. It makes for a great movie and is an entirely realistic scenario, but I don't think it has potential for long-term happiness. Does that make any sense?

25 comments
Email ThisBlogThis!Share to TwitterShare to FacebookShare to Pinterest

IWSG: 4 Things I've Learned about Publishing in 4 Years from @CarolOates

It's Insecure Writers Support Group tiiiime. This monthly hop is one of my favorite things on the internet and was founded by Alex J. Cavannaugh. It also has its very own website. Thank you all for your Ask the Acquisitions Editor questions last month. I've passed them off to CK, and my grand plan is to post the answers during next month's IWSG.

This month my biggest insecurity is time and my inability to beat it into submission, but that's for another post. Because I just happen to have the perfect IWSG post already in my back pocket---written by Carol Oates, a wonderful author of supernatural Young Adult and New Adult stories. I originally posted these 4 publishing wisdoms from Carol at my Facebook page to celebrate her recent release, Shades of Avalon, and she's graciously agreed to let me re-post them in one volume here for your benefit.

You can tell Carol thanks at her blog, on Twitter, or at her Facebook page. Alrighty then, shall we let Carol take it away? Yes, yes we shall...


It’s been four years since Shades of Atlantis began the editing process. I’ve developed as a writer. I’ve also mellowed a little about the daunting publishing industry. Here are a few things I’ve figured out.

1. It takes a village to raise a book

I’m sure most people realize that the book fairies don’t magically transform the (scrawled by hand in my case) first draft of a manuscript into a shiny, beautiful book. But, before I decided to publish, I really didn’t understand the extent of work required from so many people. Up to that decision, I was writing for my own pleasure and I didn’t much care if I had missing words or plot holes. Publishing is like an iceberg, only 10-20% is visible, the rest is below the waterline. When I decided to plunge in, it involved gathering trusted people around me that I knew would point out the flaws in my work. That’s before the manuscript even hit an editor’s desk. Manuscripts go through many hands even before distribution and promotion come in to it.

2. Publishing doesn’t leave a lot of time for writing

I used to thing publishing and writing were the same thing. When I set out years ago to publish, I had this fantasy of sitting at my desk in my writing cave all day…writing, or attending bookish events to commune with readers and bookish type people. All while someone else took care of everything else—see point 1. Those book fairies, maybe. In truth, only a portion of my time goes on writing books. The rest is spent doing the production stuff in getting from manuscript to book, communicating with readers(fun bit), organizing promotions(fun bit), keeping up to date with the industry(can be filled with drama lamas). And reading, of course(back to fun bit).

3. No one knows the right way to publish a book

Lots of people will swear they do, but the truth is there is no one way, no sure fire route to success. Every author is different in what they want to achieve with their career, if publishing is even a career to them. Each project can demand a completely different approach. When looking at an individual project, we’re talking a glass slipper being tried on by every disappointed girl in the village, rather than one-size fits all slipper socks. What one author claims worked for them may only work for them, that one time.

Shades of Avalon is release seven, and its feels like a special one because it’s the sequel to my debut, Shades of Atlantis. You’d think, I’d be used to release days by now but my tummy still flutters wildly every time I think about my work being out in the world on those first few days. The outpouring of support in the book community can be wonderful and overwhelming in the best possible way. It goes a long way to soothing my frazzled nerves. 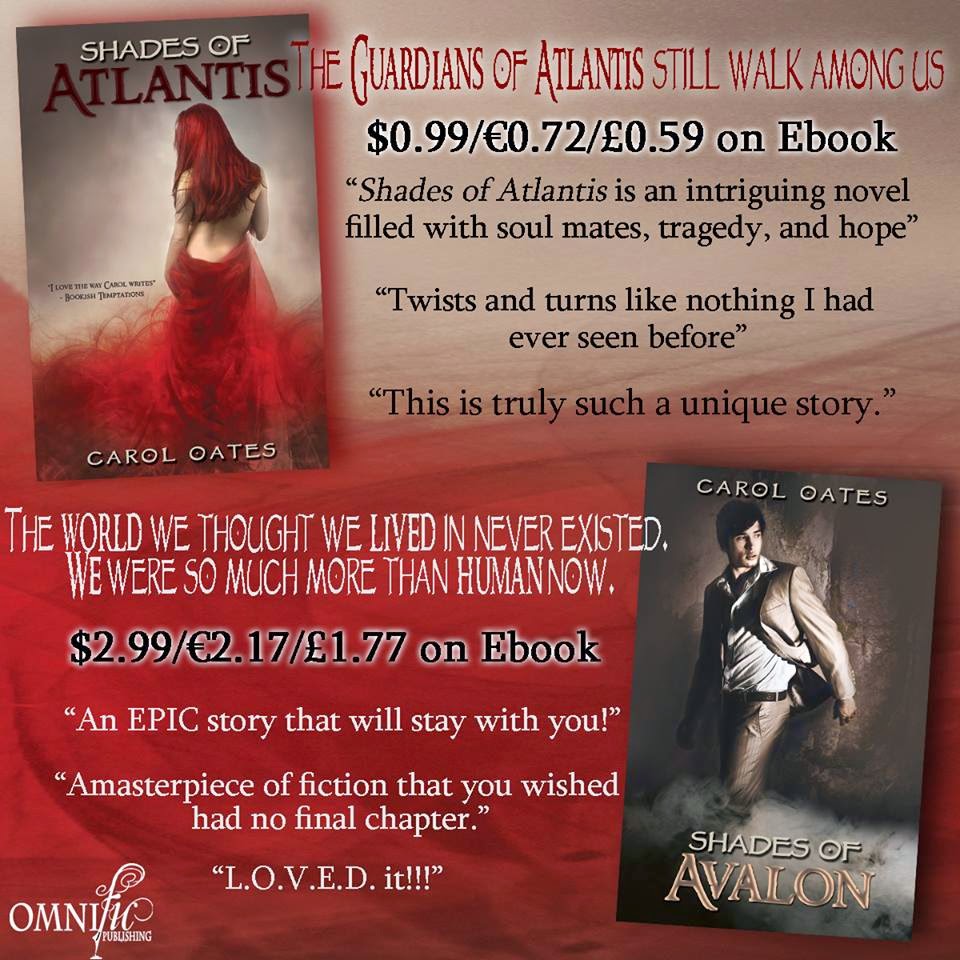 Click here to visit more Insecure Writers.
Have a great rest of your week!