Happy February, everyone! Where the flip did January go? It's a little bit scary to me that we're already a full month into the new decade. But then, sometimes it's difficult for me to accept that we ever left the 1980s in the first place, so perhaps the passage of time has always been a problem for me.

ANYWHO! Let's get onto this month's optional question:


Has a single photo or work of art ever inspired a story?

What was it and did you finish it?

It was my short story "Impressionism 101". And yes, I finished it, but it's only 2,000 words, so that's not a huge brag. BUT I am very proud of it. The way it came about was that I took a shower. Okay, there's a little bit more to the story than that...

I was active on a fanfiction site that was holding original fiction contests. I'd recently competed in one and didn't get so much as a stinking Honorable Mention. So I was a tad bitter when the next contest theme was announced: Silly, Sexy, and Supernatural.

After seeing the new contest announcement, I promptly decided, "Well, that's a stupid theme," and then I took that shower. Under the warm stream of water, free from mental distractions, my wheels started turning. For some reason, a very specific Renoir painting was in my mind, one of a young woman and her baby sister (at least, that's who I assumed the little girl was), and from there, a story was woven---one that ended up incorporating many paintings from the Art Institute of Chicago's Impressionist collection.

And guess what? I wrote the story, submitted it to the contest, and won! So don't ever, ever, ever let a failure or rejection keep you down. Every single story you write is a fresh opportunity.

Winning the contest was very cool. It was the first time I honestly believed that maybe I didn't suck at this writing thing that I loved so much. But do you want to know what was even cooler? When I visited the newly renovated Impressionist wing at the Art Institute years later and saw that my lead was hanging right next to her silly, sexy & supernatural boyfriend! 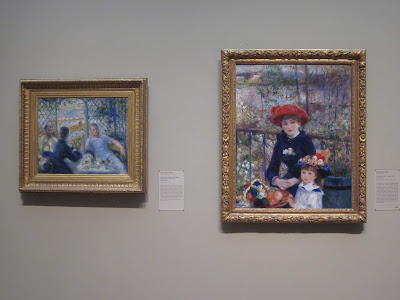 They found each other!!!

I've made copies of this short, fanciful tale (rated PG-13) available to download for free at Prolific Works, so if you're curious, please click here or on either of the pictures above to download a PDF.