Is it just me or is it not April 23?  WTF Blogger?  Nice new "scheduling" system.  I see it's working great.  *mini-rant over. for the full version come to my house, haha*


T is for: Toy Story Mania 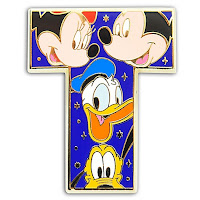 It is indeed a mania.  The almost four-year-old attraction at Disney World's Hollywood Studios is currently the most popular attraction in all four theme parks.  Why that's the case is still a mystery to me---I mean, it's an adorable ride, but not nearly worth the 130 minute waits we saw for it.  Yet park visitors flock to Toy Story Mania and Fastpasses disappear early.

I was so surprised when we picked up our Fastpasses before 10am and our window didn't start until 2:30 that afternoon.  Then when we went to use them, the Fastpass wait was over 20 minutes.  That's absurd!  Not only is it against my principles to wait that long in the freaking Fastpass lane, we had an early dinner reservation at Epcot and had to skeedaddle.  The fun thing about the situation was that we got to bestow a little Disney magic on a random family of four when we handed them the coveted Toy Story Mania passes on our way out of Hollywood Studios.

Disney World Trivia
Name the two actors who played a role in one of the 80s TV Shows featured in my A to Z posts last year AND voiced a character in all three Toy Story movies.

That's a crazy long wait time with a fast pass!

Glad to see I'm not the only person who had problems with the scheduler!

Is it all right if we trip people to get ahead of the crowd?
John R. from Cheers and Tim Allen from Tool Time.

The long lines at Disney World always bothered me too. I can't remember if it was Disney World or Six Flags that had the Jaws ride; I do remember waiting in line for more than an hour for what was a 75-second ride.

Laughing. Sorry but it was totally worth it to read this post just to 'hear' you say, 'WTF, blogger?'