K is for: Kick Back at Your Resort 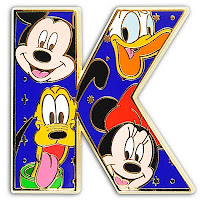 While I'm not a proponent of trekking back to your resort in the middle of a park day, I do recommend designating whole or half days as resort days.  Disney puts a tremendous amount of thought and detail into everything, including their resort grounds, so it would be a shame not to allow time to explore them.
As you've surmised by now, I don't like to overdo it.  I need my chillax time.  So in addition to avoiding the parks on arrival day, my family sleeps in one morning and hangs at the pool before hitting the parks late afternoon.  And I don't think we stayed at the parks until closing once during this last trip, opting instead to get out ahead of the mob and go for a quiet stroll, swim, or drink back at the ranch.

Don't know the trivia questions but it's cool that they open another. I agree about the relaxing bit. It's horrible to come back from vacation needing another.

I haven't known the answer to a single one of your trivia questions. I'm quite disappointed in myself because, in addition to being the Queen of Grammar, I am the Queen of Trivia. But I agree with you that it's a good idea to take a day off from the parks.

Chillaxing is the best! Carribean Beach looks like my kind of place.

OH MY GOSH! I know the answer! The other side of Pop Century with the movies like Nemo, etc! Nicki, I had know idea we were freaks together. awww. I love Disney.°o°

Babe, super wise. Seems a no-brainer that chillax time should be built into a vacation. Big thumbs up on this post.

I've never been to any of the Disney resorts (or any of these 'themed' holiday experiences!) so I can only stand back and read your account, bemused and bewildered!

Personally - I hate sitting about all day - I like to go exploring....!

SueH I refuse to go quietly!

Never stayed on site when visiting the park. Maybe we will next time.

I don't know and I live in Florida. :P How sad is that?

Eating at the resort in the restaurant adds tons of chill-ax time! You have to go back early and get dressed and by the time the meal is over, it's too late to go back to the parks. We've used those opportunities to check out the other resorts as well.