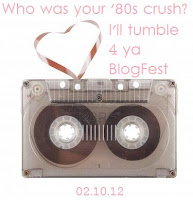 Welcome, welcome to the Tumble 4 Ya Blogfest!  I'm so excited to see which 80s faces are going to pop up in the blogworld today.  Thank you to all of you who signed up--and so many of you who mentioned the fest on your blogs. Tim Brannan even had a contest to guess his crush! You've all made this so fun. And HUGE thanks to my cohorts, Suze and M.Pax who've made setting up this fest, like, totally radical.

Right, onto my 80s crush...  I graduated high school in 1985, so I was of prime crushing age throughout the 80s.  As you can imagine, the list of my celebrity crushes from the 80s goes on and on and on.  And yet, picking just one ended up not being as difficult as I thought it would be.  Because as I scanned through pictures and videos of my top 80s men, there was only one who still made me all giggly the moment I saw him again.

He's the one who had me glued to MTV just waiting and waiting and waiting for him. I speak of Joe Elliott, lead singer of Def Leppard.  The odd thing is, he's not at at all like anything I've ever considered to be my type...but I don't know...for me he's got that somethin' somethin' that defies explanation.


Alas, all I ever had was a photograph...
What can I say? I'm apparently a sucker for pleather pants and red legwarmers. And that's to say nothing of the unnecessary terrycloth wristbands and sleeveless Union Jack tee w/ billowy scarf. But enough about Joey Bear, I'm off to see which 80s star makes you all giggly.

I still listen to Hysteria on a regular basis.

Great choice! Is anyone keeping a tally for the most popular crush?

Ick...pleather. The name of the fabric sends a shiver down my spine. On the other hand, pleather on Joe Eliot wasn't that bad. Def Leppard rocked!

I know a lot of women who crushed on Elliot!

"Pour some sugar on me!"

I was a big Def Leopard fan...musically that is. :) Great choice.

Thank you for hosting such a fun blogfest!

I still think Def Leppard are sexxay as. but I did get a bit of an unexpected surprise while watching the (I think English version of their) video for "Pour Some Sugar On Me" ... ;)

I love the very idea of this blogfest! Thank you for co-hosting! I can't wait either to see who all the 80s crushes were. Mine are definitely NOT anything other than "lame", but I'm still owning them with pride. :D

Like minds I think. I have Stevie Nicks up on mine.

Thanks for this blogfest! Enjoying reading everyone's posts.

Oh, great choice. I loved Photograph and I'm sure I'll have it stuck in my head all day now. Thanks again for hosting this fun fest, Nicki! :)

Haha...I ran in a different herd in the '80's, but even I remember that guy. Fun blogfest!!

He was my second choice.

I totally remember listening to Def Leppard on the boombox in my friend's basement when we were working on a high school English project. Ha ha!

I just had the most fun writing my post for this blogfest. Thanks for this fantastic idea, Nicki!

hee hee! Yep he could sing the hell out of Love Bites. Every girl was in love with him.
Thanks for the fun blogfest! :)

I love Def Leppard! But Rick Savage was more my type :)

Just a photograph, that's all? Thanks for the Blogfest. This is a lot of fun. Well, I'm off to visit more sites.

those band dudes! there's just something about them. they are confident enough to sing and perform in front of people!
my friends loved steve perry too, but i went for a more wholesome cute =)

thanks for the fest!
and have a hearts & flowers weekend!

Hysteria is one of my favorite songs still. LOL about the pleather pants and wristbands, too.

It is funny about that somethin' somethin' there's no accounting for. I'm sure it says something about us at some level!

Ah, Def Leppard. A boy I dated in the 80's was obsessed with that band. I will not go into the old adventures it stirs up. lol Happy Festing!

I have to admit to being a bit of a sucker for a sleeveless vest and terry wristband! Great choice and a blast from the past!

It was Duran Duran that kept me glued to my MTV, but I enjoyed the Def Leppard videos also!

OMG! One of my good friends in JR High was absolutely obsessed with Def Leppard! This blog bounce is so much fun!

Def Lep - oh, the memories are surging back. The clothes were so wonderful too, no matter how awful they are now!

I loved Def Leppard's music, still listen to ones like "I'll be two steps behind you" so despite the weird dressing style, a very choice. I enjoyed airing my crush pillow finally. :)

I'm a Def Leppard fan, but I have no idea what the names of the members are. Fun blogfest.

Lee
A Faraway View
An A to Z Co-host blog
Twitter: @AprilA2Z
#atozchallenge

Nice choice. Back then, leather pants and leg warmers on men were hot! hehehe!

I think he's totally an acceptable 80s crush. :) Thanks for hosting this!!

Def Leppard rocks! Many of my crushes of the 80's (notice the plural) are musicians. There's something about musicians...

Those ripped jeans of Joe Elliots!!

THANKS for co-hosting this hop... it's Totally been my fav. Ever. :)

Love it, and ahhh the joys of being young :)

You know, I couldn't even name a Def Leppard song . . . Unless . . . Do they sing the one about sugar? I had such a sheltered childhood. Sigh.

Wasn't he tied down in one of their videos in those pleather pants? That image seems to be seared on my memory for some reason.

I have two 80s crushes: Favorite Young Man, born 1980, and The Hurricane, born 1986. I didn't have time for celebs. I was too busy with playing and diapers and reading the same children's books over and over. I wouldn't trade that decade for anything.

Ohhh Def Leopard would probably be my number 2 for 80s... even went to their concert recently when they came to Australia... they still have it!!

Yeah, there sure were some weird fashions in the 80s. Bad decade for fashion, can I say?? But good for laughs. I'm hopping over from the fest to say hi.

Thanks for sponsoring this fun bloghop. And here you are, another metalhead! Who knew!! DL is still around. I saw them on Leno a couple of months ago.

Def Leppard was on MTV constantly. They were huge.

I loved Def Leppard back in middle school and Joe Elliot is a great choice.