In these crazy days that seem to be suddenly (or is it perpetually?) upon me, I just love it when I can accomplish two things with one post. :)  First up is Auntie Tara's Short Story Prompt.  And I'll admit it---I'm cheating.  Rather than write a complete 250-500 word story with the February theme "Secret Admirer,"  I put forth the first three paragraphs of something I've already written.  But it is a short story and it does entail a secret admirer.

I truly did intend to write up something new, but as my mind raced with all the different possible directions I could take, I realized I already had something.  And then a new development helped me know that was the way to go (said development is part B of this here post.)


Excerpt for dear Auntie Tara:
The first night Rose heard it, she thought hooligans were in her yard playing their music too loud. She reached for her hearing aid on the nightstand and turned the volume all the way up to see if she’d recognize any of the voices. But what she heard was music. She had no idea what genre the kids were into these days, but she could be fairly certain it wasn’t the big band swing that leaked into her room through the closed window. These were the songs she and Henry used to dance to…back in the day. She turned the volume down a bit, but kept her hearing aid in that night and fell asleep with a smile.
The following evening, she sat up in her chair a bit longer than usual. She heard it again. She stood and directed her walker to the window and leaned tentatively forward to peer through the gauzy sheer, but she couldn’t see anybody. She leaned forward more and more until her forehead pressed against the pane. It was cool despite the muggy night that hovered on the other side. She still couldn’t see anything, but thought perhaps the next night she’d be brave enough to open the drape.
She was. Yet even still, she saw nothing. Her eyesight wasn’t what it used to be. But she had a new realization that night. She didn’t hear a band or an orchestra playing. It was just a voice—a rich, smooth, melodic voice. Strong and seductive. He was singing all her favorite songs. He was singing to her. She blushed immediately at the thought. Not to me, she told herself. And yet…he was outside her window. Who else could he be singing to? 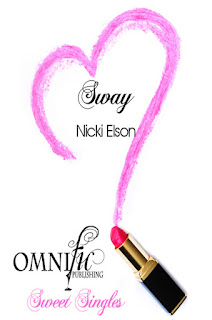 I feel 99.84% confident when I say you'll never, never, ever be able to guess the identity of the mystery crooner before the moment of the big reveal---those of you who've already read the story, feel free to back me up in the comments. ;) But if you're feeling up to the challenge, here's part B:

My publisher has put my short story, Sway, as well as other wonderful short stories from the Summer Lovin' Anthologies up as FREE Singles!!!  You can download the Mobi, ePub, PDF zip file now, or hold out to see if Kindle & Nook versions come through.  Either way, I hope you enjoy the story and please do let me know your reaction to the identity of the "secret admirer."

I love it...but have no idea who it could possibly be.

Oh, what a tease. I want to know now! And I keep hearing about those pages in Three Daves. I'm so tempted to cheat and read those pages first. ;)

It's John Cusak with a boombox? :)

aw precious oldies =)
thanks for the story & links.
loved it!

Yes, I am still alive... LOL. Very intriguing snippet. It does make one think Hmmmm.

Congrats on the anthology and short... I LOVE the cover.

Still in Florida. Off to Key West tomorrow. I had an intense few weeks and now I can relax for TWO WHOLE DAYS.

I will fill you in via email. I hope all is well in Illinois.

Nick this is wonderful thank you.

My first thought was the same as Heather's but I don't think that's the real answer. :)

*shoots hand in the air* Ooh, ooh, I know the identity of the secret admirer! Loved this whimsical short story. ;) I liked Heather's guess!

I want to know the identity of the crooner. Mel Torme? Tony Bennett? I need to know!!!
BTW...very nice writing! As usual.

I read Sway over the weekend so now I know who it really is! Ha ha!