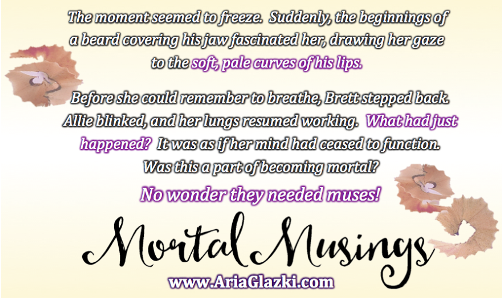 Congrats to Aria Glazki on the release of Mortal Musings! Since the story centers on a writer struggling with his muse, I thought it would be fun for you to get a peek inside the head of the writer of this novel. Here are...

1:  I started writing the first version of this book as a high school senior. I was taking an independent study creative writing class, and my very patient advisor was waiting on pages, despite the fact that I had no idea what to write about. I still remember sitting in our school library, staring at the blank page of the computer, contemplating what inspiration is and how to get it. And then I made a character wonder the same thing, and that is how Mortal Musings began.

2: I gave up on that false start ever becoming a book, especially after feedback from the Creative Writing instructors at my University. They all hated it.

But then, as I came to learn, they generally disapproved of all genre fiction.

It takes time and experience to recognize which advice falls under which category. This is why you shouldn't throw any of your writing away!

3: After I finished Mending Heartstrings and sent it out on submission, I decided it was time to look at that false start again. Oh, the hindsight of maturity and experience. It was a mess.

But the basic concept was good, some scenes were solid (despite lots of head-hopping), and I wanted to finally finish (read: rewrite what I had, and then finish) this story. I'm so glad that all these many years later, this finished product exists!

Many people (including ones who should know better) have insinuated that I'm publishing this book on my own because I haven't received the "industry approval" of a traditional deal. That simply isn't true. For a variety of reasons, the offers I received weren't a good match for this book. Publishing independently is a lot of work, but it was the right call for this project, and what I really care about is getting my books into readers' (aka your) hands!

Every project needs to find its own way, and I encourage everyone not to rule out an option just because some people may look down upon it. Do your research, and then do what's right for you

5: When lining up for one of our graduation ceremonies, a girl from my class asked me to name a character in this book after her. Even all these many years later, I did.
The character didn't exist yet in the high school version, but that request made naming her a no-brainer. That's also why Erika's name is spelled with a k

6: The summer after I graduated high school, I met someone who shared my main character's name (Brett). He was the first Brett I had ever met, and remains the only one to this day. Life's funny that way.

But besides the name and being great guys, the two Bretts really don't have anything in common.

Do you have questions about Mortal Musings or how I write? Ask them in the comments! 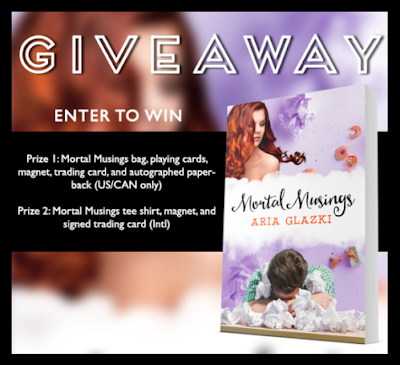 Thanks so much for hosting me, Nicki, and all your support! :)

You have to do what's right for you!
And what's with haters of genre fiction? The nerve...

Sooo many people still look down on genre fiction as inferior to mainstream and literary fiction! Especially with romance, and I've heard similarly with fantasy. Their loss, except when they start telling young writers that writing genre fiction is a waste of time... sigh

Congratulations Aria!
They say that there's a reader for every type/style of story. So writers should write what's in their hearts.

Looking down on genre fiction is literary snobbery... plenty of that going around.
Remember it WILL appeal to somebody out there.

Thanks, Michelle! Such a great point that every story needs to find its audience before it can be appreciated.

And yes, the literary snobbery is very annoying and even a bit delusional, which aspiring writers need to hear so they're not discouraged by the wrong perspective.

There is a chance you're qualified to get a free $1,000 Amazon Gift Card.