A Novella to Kick Cancer's Bum 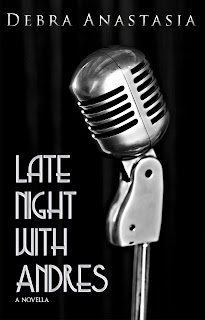 Today I get to tell you about something very cool. Author Debra Anastasia and all the people at Omnific Publishing who worked on her just-released novella, Late Night with Andres, did it as a labor of love so that 100% of the proceeds generated from sales of the book can be donated to assist in the battle against breast cancer.

I haven't read the story yet, but I know Debra well enough to know anyone who reads it is in for a wild, hilarious ride.  Here's the linkage:


Late Night with Andres at Amazon

Late Night with Andres at Goodreads

Rising-star blogger Milla Kierce knows she's arrived when she sees the swag basket in her dressing room on the night of her late-night television debut. But before she can bite into the muffin that symbolizes her success, gunfire echoes through the TV studio. She's just hidden herself (mostly in plain sight) when the door flings open. Instead of a gunman, there stands one of the world's most popular rock stars, Gage Daxson, looking for his own way out of danger.
Thrown together, they'll battle a venomous man seeking revenge and his own sexual pleasure, but they may never leave the building again. Distracted by fear, fame, and infamy, can these two somehow find their way to each other?
Equal parts horrifying and hilarious, Debra Anastasia's Late Night With Andres offers more than a few twists and turns—and, of course, enough heat to keep things interesting.

Great cause! My sister is a breast cancer survivor. I just purchased Debra's book. But the link didn't get me there so I googled Amazon and took it from there.

What a great thing to do for the cause!

What a great thing for these authors to do. Thanks for sharing about it. I hope they sell tons!

That's an awesome cover. Cancer sucks and it's bum needs to be kicked.

Can't think of anything more worthwhile.

What a great idea. Thank you for doing this, Debra!