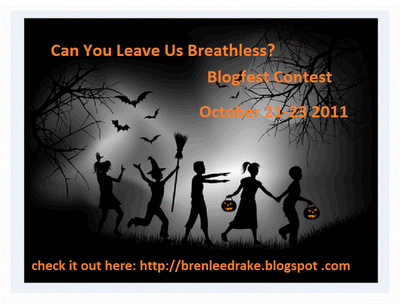 This is my entry for Brenda Drake's "Can You Leave Us Breathless" blogfest.  It's a brief excerpt from chapter 11 of my as-of-yet-untitled WIP.  I hope you like (and critiques are welcome).


Excerpt
“It’s true that angels are less prone to temptation,” he said. “But when we give in, the betrayal is at a higher magnitude. It’s nearly unforgivable because it’s not in our nature, so it isn’t weakness we demonstrate.  It’s willfulness, which is much worse. But as with humans, the love of the Lord can save us---if we let it.”
His fingertips roved Maggie’s face, tracing her cheekbones, over the bridge of her nose, across her lips.  She closed her eyes as he glided over her eyelids while the sound of his smooth voice rolled over her.
“When we overcome the lure to sin,” he continued, “we’re strengthened tenfold by the Holy Spirit and made able to face our temptations more easily.”
Maggie thought of how different the calming sensations he now sent into her were from those she’d felt the last time he’d touched her. There had been an urgency then, something on the verge of losing control. He'd clearly mastered whatever had afflicted him then.
“We can come closer to that which tempts us than we previously would have dared,” he murmured.
Something tickled Maggie's lips, but it wasn’t his hands. His warm breath drifted in through the slight part in her lips as his mouth passed gently over hers, scarcely brushing against it.
He dropped one hand to caress the side of her throat as he rested his forehead on hers and concluded, “And resist without effort.”
His tone carried not a hint of smugness, and Maggie wondered how he didn’t feel the throbbing vein in her neck as it pulsed in time with her thundering heart.
Posted by Nicki Elson at 6:30 AM

Hi Nicki, I'm new to your blog and love it. I'm also participating in Brenda's blogfest and decided to hop around and see what my fellow contests are up to. All I can say to your entry is wow! and double wow! I'm breathless... and breathless!

I love the last sentence!

Nick, this is very different from 3D. What made you decide to move in this direction?

Breathless for sure. I loved the back and forth of dialogue and physical action. It teases you the way He teases Maggie. Well done. Thanks for sharing!

Sexy excerpt! Now THAT's a great kiss. It's tough to get the same flow of the narrative when jumping into an excerpt, but you might want to add "that" to the first sentence because initially I read it as "It's (the) true angels..." (if that makes sense) instead of "It's true that angels...". I know we try to delete unnecessary "that"s but it might help?

Also, you might change the sentence to “the Holy Spirit strengthens us tenfold and lets us face our temptations more easily.” to make it more active voice. (Can you tell I'm full into editing mode with Jessica Royer Ocken on my next novel?) ;)

Nice! I love the contradiction in the angels words and actions. Fantastic excerpt.

goodness!
but i am not surprised after what i've been reading in 3 daves! never knew it was going to be so spicy!
ay caramba!

I know I already commented, but I keep coming back to read this again. I love it. Are you looking for a critique partner, by any chance?

He seems like he could be a bit of a bad boy, and definitely a tease. I love how he demonstrates so beautifully exactly what he's talking about. I wonder what he's thinking!

Sorry, had to catch my breath!

Very nice. Who would have thought an angel could be so hot?

Sinfully delicious. Very nicely done. There are a lot of "kisses" in this contest, and this is the best one I've read yet. Good luck!

Dear Nicky, I loved that post and am curious how it will go on. Maybe as Tina Turner sings?
"I think you might like to hear something from us nice and easy
but there's just one thing you see
we never ever do nothing nice and easy
we always do it nice and rough
so we're gonna take the beginning of this song and do it easy
and then we're gonna do the finish rough
this is the way we do "Proud Mary"
Makes you breathless, too :-)

Interesting concept for angels but as far as I can see, the angel is not succeeding very well. ;-) Breathless for sure.

Thank you for participating in Can You Leave Us Breathless? Blogfest Contest. Your entry has been judged.

Breathless for sure, and I have to wonder what's going to happen next. I hope you don't go the easy way!

I'm definitely panting for more. That opening paragraph completely pulled me in.

Sorry I missed this one Nicki....