It's happened. My obsession with the 31st season of CBS's Survivor (Survivor Second Chance: Cambodia) has spilled into a playlist. This has to be my all-time favorite collection of final seven players. Below is my tribute to them---with a theme song for each player at this point in the game, plus a bonus for all those who've been voted out.

(File this post under: What Happens When Nicki Cleans Her House. My imagination has too much time to play and usually ends up stuck somewhere completely unproductive...is how I became a writer in the first place.)

The order of songs isn't random, I've ranked the players by who I think has the best chance of making it to final tribal AND winning the whole shebang. I explan my choices below. Even if you don't watch Survivor, I hope you enjoy the playlist. 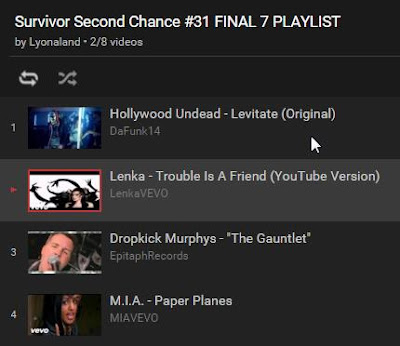 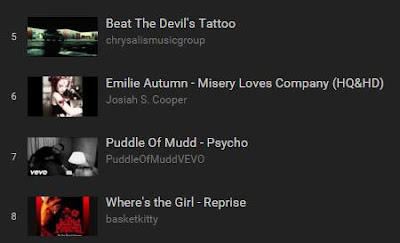 #1 Spencer - "Levitate"  I've admittedly been in the young lad's corner since before he set foot on the beach, but he's playing a smart, independent game and has had to overcome many obstacles. The jury's gotta respect that. From my comfy sofa at home, he looks to be a big threat, but I'm not sure his fellow players see it the same way from their vantage point, so I think his chances are good of making it to final tribal.

I know this song is about drugs, but it's got some great lyrics that reflect Spencer's gameplay: "F*** you, I'm by myself."  Survivor's Charlie Brown has learned the hard way how to play this game by himself. "Just when you think that true love's begun, It goes off at any second just like a loaded gun" 'Cuz he doesn't let friendship determine his vote. "Wondering how to fix these damages" His independent play calls for fancy footwork with the people he wants to keep trusting him.

#2 Kelley - "Trouble is a Friend"  Girl's got game - and a hidden immunity idol! Every week I've thought the others were fools to keep her around as long as they have, but like with Spencer, she's playing a great manipulation game, and I think she's keeping her savvy masked better than he is.

In this song, Kelley is the trouble: "(S)he waits in the wings, (s)he's gotta play a part"  and I think the cute, spunky beat fits her personality.


#3 Jeremy - "The Gauntlet"  If the man makes it to final tribal, he's gonna win hands down, no matter who he's up against. The jury loves him. And what's not to love? The trouble is, everyone around him knows he'll win, so I can't see him making it all the way to final tribal. 'Course, he's also got a super secret hidden idol...

The determination reflected in this song is what makes me think of Jeremy's gameplay. And the chorus is so him: "Stand up and fight, and I'll stand up with you," especially when he played that idol on Stephen. When he's your friend, he's your friend to the end.


#4 Tasha - "Paper Planes"  The lyric I like most for her at this point in the game is "If you catch me at the border, I got visas in my name" because she's got options. I think she legitly wants to stick with Jeremy and Spencer, but she can always change her mind if something doesn't feel right and jump on with the all-girl alliance - doing so is the only way I can see her taking home the win.

She was a "bonafide hustler" makin' her name when she saved herself and Savage at Angkor by courting Abi. That alone ought to win her jury points.


#5 Keith - "Beat the Devil's Tattoo"  The emotionless tone of this song amid the unfavorable conditions it depicts feels very Keith to me. He doesn't let the elements or lack of food bother him, and he'll stick to the plan with zero weight given to his personal feelings. Yet I think it's his warm personality that'll win him votes over the two players below.

"You're body's aching. Every bone is breaking. Nothing seems to shake it. It just keeps holding on" is a testament to Keith's physical fortitude. He even stood strong in a situation where Joey Amazing went down. Come on! That should also win him some votes.


#6 Kimmi - "Misery Loves Company"  She's laid low through a lot of the season, but she came alive last episode. These lyrics seem to reflect her current attitude toward the Jeremy/Spencer alliance: "Do I need you? Yes and no" and "You're so easy to read, but the book is boring me."  And let's not forget her "I'm not for you; you're not for me. I'll kill you first; you wait and see" attitude toward Monica earlier on. If she can be that Kimmi through the next few votes, maybe the jury won't see her as the goat I'm afraid they've pegged her as.

Judging by some of her confessionals, "Hell is others" seems to be how Kimmi generally feels about coexisting with her tribemates, which I'm guessing doesn't help her chances of scoring votes at the final tribal.


#7 Abi-Maria - "Psycho"  I mean psycho in the very best of ways. I admire passion, and she's full of it. She's definitely kept her opponents on their toes.

Her chances of making it into the final tribal council are excellent. Her chances of winning? Next to zero. She's too caustic to have made friends outside of a few, and the jury will likely see her as a goat, being led to the end as a weak opponent. I don't think that assessment's fair. She exercised an inordinate amount of power during many of the early votes, and she's 100% looked out for her own interests throughout the game - isn't that what Survivor's all about?

For everyone who's already been voted out - "Where's the Girl"  A song of betrayal and letting go.
Posted by Nicki Elson at 5:09 PM

Today's meeting of the Insecure Writer's Support Group coincides with the release of a writer friend's book. Not just any writer friend---Jennifer Lane has become one of my best writer friends. Not only is she an invaluable critique partner, she's a safe place to vent and an infallible voice of reason. She's a big reason insecurity doesn't keep me down for long. My Christmas wish for all of you insecure writers out there is for you to have your very own Jennifer Lane. :)

The other thing about her is---she writes great books! Her new release. Aced, is the 2nd in her Blocked series, which I've found to be a fresh approach to New Adult. Below is my review at Goodreads. If you've already read Aced, get your review up on Amazon today and you'll automatically be entered to win a $25 gift card. Join today's Facebook Party with over 25 authors (including me from 5-5:30pm EST) and prizes. 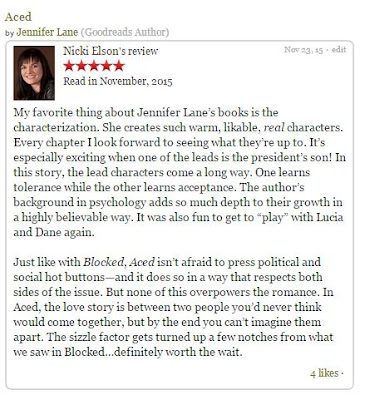 Jennifer lets us in on the musical inspiration for ACED in this guest post:

Music is quite a muse for me in my writing. I especially love going for a long walk as I listen to music and dream up plot bunnies.

New Adult sports romance ACED (Blocked #2) dives into race and ethnicity. I’m saddened America has become increasingly divided along racial lines in recent years. We are responsible to understand how our ethnic backgrounds affect ourselves and others. And, I yearn for strong leadership to help us find common ground.

When I wrote a presidential speech in ACED, following a tragedy involving racial discrimination, I found my inspiration in a song by MUSE. (Ironic, huh?)

These lyrics ARE my muse:

And no one thinks they are to blame
Why can’t they see
When we bleed, we bleed the same

There are also two current songs that make me think of ACED.

“Lay It All On Me” by Rudimental and Ed Sheeran is easily a song hero Alejandro would sing to heroine Maddie to help her through her emotional struggles.

And I adore this song “Hotline Bling” by Drake! I can picture hot wrestler Jaylon Hart sing this to his ex-girlfriend Maddie. 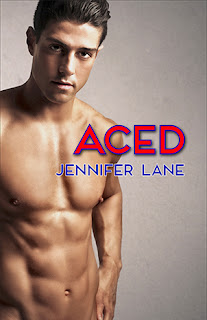 Add to Goodreads
Follow the TOUR
Get ACED!
Amazon