It's All Fun & Games 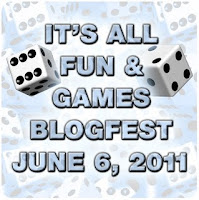 My typical response when anyone says, "Hey, wanna play **insert name of game here, any game at all**?" is a groan.  I don't know why, I just don't care for games. Maybe because the words "Its your turn" always seem to interrupt my conversations.

Regardless, I have signed up for Alex J. Cavanaugh's It's All Fun & Games blogfest in hopes that someone will come up with a game that'll strike my fancy. Good luck with that.

For my part, I've selected three games I can be talked into with a minimal amount of arm twisting, so maybe you'll like them too:

Drink!  You know the game---where every time somebody says a certain word or does a certain thing, you take a drink.  For example, let's spice up this blogfest and everybody take a drink whenever Alex says "Ninja"!  We ought to be schnockered by noon.

Bananagrams  It's a lot like Scrabble but much faster.  Everybody works on their word puzzle simultaneously, so there's none of that forgetting you're even playing a game while you wait eons for the other players to finally spell out a flipping word.  And to make the game even better---the letter tiles come in a canvas ba-na-na!


Liars Dice  As featured in Pirates of the Caribbean: Dead Man's Chest when Will Turner faced off against Davy "do-you-fear-death" Jones.  The rules are simple, and skillful lying can easily beat luck, so yeah, once that arm's twisted I have a lot of fun with this one. 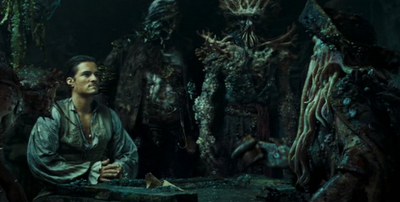 Cool games! I've never heard of Liar's Dice but I bet I'd be good at it! See you never knew I was lying! Have a great week.

Liar's Dice sounds like a blast. I'm a pretty good liar, LOL. Well, not really, but I'd love to give it a try. :) Bananagrams sounds like a of fun as well and yep, I do love a good drinking game.

Bananagrams seems like good fun! But I'm time-challenged (we're leaving on holiday the 28th) and have got to make progress on this dreadful list of things to do - but a cold bottle of Sancere wine could tempt me into a drinking game!

i'm playing too! love the bananagrams & anything to do w/taking a drink =)
now stop by my blog, i have something for you!

Okay, this is the second time I've read about Bananagrams and my interest ins officially piqued enough, now, to check it out!

Oh no! I've started an alcohol epidemic!
Thanks for participating in the blogfest.

Hardly anyone I know plays Bananagrams. It's an awesome game. I'm glad to find a kindred spirit!

Ah, yes. A drinking game featured on my list, too. Awesome choices!

So Bananagrams is a little like Scrabble? I'd love that!

Awesome. My boys love Bananagrams and I have been curious about Liar's Dice for a while.

Drinking whilst lying about which words are "real" sounds like fun - ever thought about combining them? :-)

The drinking game is tempting...alas, didn't bring my booze to work! :) Where can I get my hands on some Liar's Dice?

Never heard of the last two, but I think I used to play the first one a lot except it didn't have any rules and I didn't know we were playing a game--actually maybe we weren't.


Lee
Tossing It Out

Oh, I spent many hours playing liars dice in college and DRINK. We used to play during Bob Newhart. Bob was the word. lol

I remember that one drink game from college. Ha. The memories. Nice to meet you. I'm a new follower from the blogfest.

Man, that drinking game had SO MANY variations, didn't it? We used to play 'Norm' to Cheers... and i know there was another after the traditional 'beam me up' where you took a shot of Jim Beam...

Bananagrams looks FABULOUS! but on the lying... I tend to only be able to fool people with words (like I can pull off Balderdash) but I am bad at any other lying game.

(by the way, that wine review above seriously makes me wish I wrote chick lit--how fabulous is that?! What a GREAT idea!)

Yeah...waiting for people to put down their words in Scrabble is one of the minor annoyances. I'll have to check out Bananagrams! I love the little pouch...

I've heard of Bananagrams, but never played.... IT looks like fun!

Tell hubs when we have dinner we'll break out the cards. We'll just have to get you involved.LOL.

YAY! I chose bananagrams too - love that one!

But if it's like Scrabble with point values for each letter, betcha I can beat ya.

Nice to meet you!

Liar's Dice would be fun to play. Great pic!

You had such a unique selection. How cool! And yep, i know that Drink game well....

The drinking game is not a safe one to play while watching soap operas, the evening news, or any commercial for check-cashing places. Thanks for sharing these great games, though!

I'm thinking I should probably not try too hard to become good at Liar's Dice.

Liar's Dice sounds intriguing--I've never heard of it before!

I'm so with you on the games thing. I'm not a big player, for sure! But I do love the drinking game!

Hi,
I found you via Suze, and your first sentence fascinated me - because you'll see the same reaction in me (Husband likes to play analytical or strategic games like chess or "Risk", I - if I have to - prefer scrabble, Mah Jongg or Rummee. So your proposed games sound enticing - hope we can buy Bananagrams here in Germany - no need of an egg-timer for fellow-players writing their thesis while thinking about a new word to lay :-)

These sound terrific. You have my interest.

*gasp!* Where have Bananagrams been all my life?!