Alrighty then, here are the final 80s TV Shows Trivia answers.  Much thanks to everyone who played. :)  If you see your name below, this badge to the left is all yours.

Remington Steele
One of the show's early writers and producers, Glenn Gordon Caron, quit after the first ten episodes to start his own production company.  He went on to write and produce another hit 80s TV show, also about a pair of bickering "I hate you/I love you" detectives.  Know what it was?

A: Moonlighting
Who got it right? Tara Tyler; Alex J. Cavanaugh; Anne Gallagher; Lynn Reed.  I'm on the bubble about Michael Di Gesu because he was going for "McMillon & Wife" but did switch to the correct answer when he saw other guesses, so, hrm, 1/2 point?

Saved by the Bell
Only four of Saved by the Bell's seven regular characters (pictured here) appeared in each of the TV show's eighty-six episodes. Can you name them?
A: Zack, Slater, Screech & Lisa
Who got it right? Carrie. You were soooo close, Michael Di Gesu with 3 out of the 4, So 3/4 point.

thirtysomething
This series was influenced by a 1983 movie that also featured an ensemble cast of baby boomer yuppies.  What move was it?
A: The Big Chill
Who got it right? Anne Gallagher; Tara Tyler

Unsolved Mysteries
The concept of the show is based on a series of three specials run on NBC in 1986.  The success of these specials, which focused only on missing persons, led to an expanded focus and the creation of Unsolved Mysteries as we know it today.  Does anyone remember the name of those three 1986 specials?
A:  Missing...Have You Seen This Person
Who got it right?  Well, nobody. But Anne Gallagher demonstrates an excellent 80s memory and named the 1981 missing persons incident that caught America's attention and thus spurred TV network's interest in such shows. I'm giving her 1/4 point (and I think you're beginning to see why nobody ever lets me count the ballots...)

The Wonder Years
This coming of age TV series was inspired by a classic 1983 movie. Can you name the movie?
A: A Christmas Story
Who got it right?  Nobody :(  But "Stand By Me" was an excellent guess by Anne Gallagher---it was made in 1986, two years before The Wonder Years started and is named by tv tropes as the show's spritual successor, soooo 1/2 point.

Max Headroom
What is Max Headroom's name derived from?
A: A British sign warning of low clearance
Who got it right?  Alex J. Cavanaugh

The Young Ones
What was the occupation of three of the four cast members (all but the actor who played Mike) before The Young Ones?
A: Stand Up Comedians
Who got it right? Gyran Gymble

The Equalizer
In the pilot episode, a regular from Seinfeld appears as the character who gave McCall his nickname, the Equalizer.  Anyone care to make a guess what actor that was?
A: Jerry Stiller, George's dad
Who got it right?  Another tricky one---nobody got it, but lots of fun guesses. :)

Since Anne has proven herself an 80s diva, I'm hoping she'll enjoy a romp back in time and will send her a signed copy of Three Daves.
And because I know deep down he really wants it,
Alex wins a One Hit Wonders of the 80s CD. 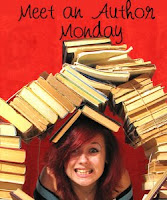 I...I think I'm ready for another blog hop...assuming my morning gardening goes okay, and the boss doesn't e-mail me with anything too pressing...I do miss my Monday Author buddies, so, yes, I'm going to do it...
It's Meet an Author Monday!
A great chance to mix & mingle with other authors.  Sign up below & post the icon on your blog, or just hop around, whichever you prefer.
Posted by Nicki Elson at 9:55 AM

Glad you're back with us on the blog hop! Congratulations to trivia whiz Michael. Did you write a story for the YA or the steamy adult anthology?

I hopped over to Chick Lit & Wine to comment too since I missed it when you posted. Hope the book signing went well!

OMG I'm jumping up and down screaming and scared the dogs. Three Daves! Thank you so much Nicki. I've been dying to read this book. It will be so much fun to go back in time.

I had such a great time participating in your blog challenge. I think you really should do a game show or something. Too much fun!!!

Did you ever watch that show 'Moon Over Miami?' It had a brief run and I think was supposed to be kind of like 'Moonlighting.' I loved the chemistry between those two and was sad when it went off the air.

Really enjoyed this, thanks!

Hey I was third! Congratulations to Anne and Michael.

Yeah to the winners. i have to admit I am horrible at trivia. AAlthough i could get he saved by the bell question right. I loved the boys:)Slater, Screech and Zack had me rolling on the floor at their antics.

I now have sudden urge to rewatch THE WONDER YEARS reruns, followed by REMINGTON STEELE. :-)

i really enjoyed your 80s tv trivia. that was fun!

I got back into Chicago late this afternoon.... YUKKY WEATHER! Where's the sun. I left when it was gray and returned and it's still gray....LOL!

I'm SO excited about the anthology..... Now we can have our birthday drink! YAY! Taurus ends on the 20th so we still have lots of time....

Oooh, I'm so sorry I missed it! Although I probably would've failed miserably at guessing the answers, I would've had fun trying! Darn it! Maybe next time. :)

I wish I had seen this post earlier. I would have played, but I don't think I would have done too well. I'm still pondering Remington Steele and The Equalizer.

You can never go wrong with 80's trivia! What a fun idea, but I don't know if I would have even know half of that. Where did you come up withg the questions?