Hello, fellow IWSGers! I hope October finds you doing well - er, at least as well as one can expect to be in the year 2020. Aren't we all so lucky to have our writing to distract us? After writing this post (on Sunday), I'm heading out for summa dis on this fine autumn day in the Midwest: 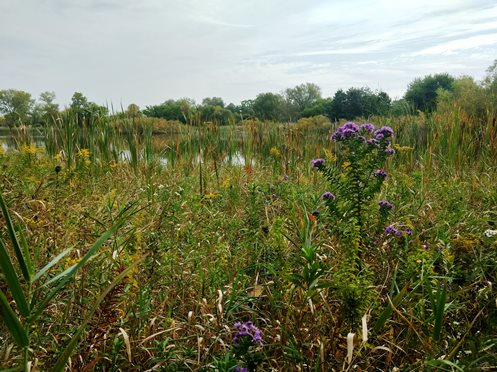 To me, a "working writer" is someone who consistently earns a decent chunk of change through writing. They don't necessarily have to make a living at it, but it should at least be a substantial supplement to their regular income.

I guess technically I could be considered a working writer since my day job involves a lot of writing, though it's mostly in blurb form for social media, marketing emails, catalogs, etc. I occasionally get to write longer form for blogs and newsletters.

As for fiction writing, I'm definitely a hobbyist. What that looks like for me is: I write what I want, when I want. I promote when I publish a new book, but I don't expect to earn a regular income from my novels...not that I wouldn't take it if it came to me.

But that doesn't mean I haven't learned a thing or two about marketing a book, mostly through tips from other independent authors and lots of trial and error. I've experienced a couple of successes with my latest release - and some failures - so for the next few IWSGs, I want to share with you what's worked for me and what hasn't in the hopes that you'll find some tidbit to help you with your own publishing adventures.

I'll get into more detail on all of the below in future posts, but for now, a quick overview of MOLLY UNPLANNED's path so far:

Failure: Put her up for pre-order too early without marketing, so she entered release day behind the proverbial eight ball with low rankings.

Success: Released at a 99-cent sale price and advertised the heck out of her in cheap-reads newsletters. (She hit #19 in two of her categories and 3,358 overall in Amazon. But could these have been even higher without the failure above?)

Modest Success: Got a handful of reviews at Amazon on release day by offering Advance Review Copies through my author email list and LibraryThing.

Failure: I had no set marketing plan for after publication week. Molly's sales & rankings plummeted immediately after release week.

Failure: I panicked and advertised in cheap-reads newsletters at the book's then full price of $2.99. Response was abysmal. People subscribing to those newsletters only want free and .99c books.

Meh: I placed targeted Facebook Ads emphasizing "Read FREE in Kindle Unlimited." Seemed to give a small bump in KU reads and rankings, but I probably didn't make my money back. (If you're not familiar with KU and KDP, you can read all about it here.)

Working Well So Far: In September and October, I've focused on getting more reviews & ratings through new means of free and paid outreach. Molly's up to 37 Amazon ratings/16 reviews. She's offered at NetGalley this month, so wish me luck! Sometimes those romance reviewers can be pretty tough. *gulp*

Unexpected Success: One of my means for gathering more reviews & ratings was to offer the book for free through KDP (Kindle Direct Publishing) - coupled with paid promotions in cheap-reads newsletters - and this surprisingly resulted in a big boost to KU reads throughout the following weeks.

Like I said, I'll dig more into each of these, but this post has gotten too long, so I'll leave it at that for now. Thanks for stopping by. 😊 See ya at your place soon. 😉

Insecure Writer's Support Group (IWSG) Purpose: To share and encourage. Writers can express doubts and concerns without fear of appearing foolish or weak. Those who have been through the fire can offer assistance and guidance. It’s a safe haven for insecure writers of all kinds. This wonderful group for writers was begun by the one and clonely Alex J. Cavannaugh.
This month's awesome co-hosts are:
Jemima Pett
Beth Camp
Beverly Stowe McClure
Gwen Gardner
Posted by Nicki Elson at 5:25 AM

I think you can be a working writer even if you don't make money at it if you're working at it consistently. Thanks for sharing what worked and didn't work with your marketing plans for your book. Marketing is such a hard part of being an author, and your advice is really helpful.

A lot of paid ads don't work well or earn back your investment. I think getting a lot of reviews and early is one of the most important thing an author can do for marketing.

Lots of good information. Thanks. I am still sloughing through the marketing process. It's overwhelming to me.

Now you know what works and what doesn't - right now, anyway.

And I failed to mention in my previous post that it looks like you have a photo of a prairie in your header. I recognize thistle in the forefront and goldenrod in the back. Are you into prairies? I used to cultivate one in Ohio.

39 Amazon reviews is awesome! I like the one that said Cal is "really good with a little bad thrown in" LOL

Thanks for giving those detailed summaries on how each of your marketing strategies worked! As I'm preparing to market my next book, it's good to have that "beyond release" thought in mind.
Thank you!