I'll not be joining the masses at the movie theater this weekend---I prefer a less chaotic experience---buuuut, that doesn't mean I'm not getting psyched for the big release!  Now that I've finally been able to sit down w/ my Chicago Tribune A+E section, I'd like to share w/ other Harryphytes something totally cool!

I generally don't like it when movies stray from the books, unless there's a really, really good reason, and this time I think production designer Stuart Craig has an utterly awesome reason for changing the location of a certain death in Harry Potter and the Deathly Hallows---Part 2.  Here, I'll let him tell you:


(per "Wizard of Destruction" by Rebecca Keegan): 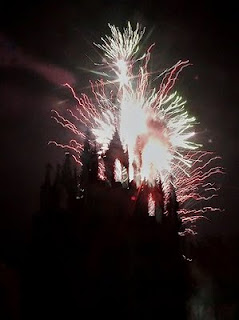 "In the book (the character) dies in the Shrieking Shack.  I specifically asked J.K Rowling if she would mind if we transposed that to a boathouse.  I felt it would make a very interesting, very theatrical set.  There was a lot of glass in the design for the boathouse.  Through the glass, you're aware of Hogwarts in flames and the water inside the boathouse reflects the flames.  You get a great sense of the height and the drama."

-Stuart Craig, production designer
Light. It. Up!  I'm now more excited than I ever thought I could be for a scene that ripped my heart out when I read it in the book.  Well done, Stuart.


So, which night will you be seeing the movie?
Also, Lisa Galek is hosting two contests, including a very fun blogfest on Harry Potter's Birthday, July 31.  C'mon, you know you're going to want you some more Harry after the movie's done. ;) 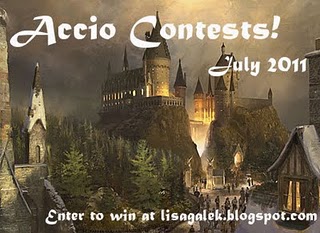 I'll see it this weekend, but no crazy midnight show for me!

i'm still waiting for the pt 1 dvd =)
me excited but lazy and cheap!

I'll see it on Friday at six pm. Another couple and us always do the HP opening day movies together.... I can't wait!

No midnight show for me :( I have to work at 7 the next morning and my eyes would be 2 big ol puff balls and I'll probably also have a migraine from all the crying I will be doing. So we're holding off until sometime next week. Can't wait!!!

Awe, I guess that makes sense! Glad I know the reason before I see it and get miffed! Thanks for the heads up ;)

'Light. It. Up! I'm now more excited than I ever thought I could be'

That was cute. I totally 'heard' your voice when you said that.

I'm waiting for the DVD!

I wait for the crowds to die down (all right, they may not this time around) and for my husband to be willing to take on babysitting duties. He and I cannot go together since we don't have anyone to watch the kids. Maybe next week?