The marvelous Nick Wilford has a release today! A CHANGE OF MIND AND OTHER STORIES is a collection of short speculative fiction. If you read any of Nick's flash fic during A to Z, you know he's a wizard with words. We're all in for a treat with this brand new collection of stories with a twisted edge. 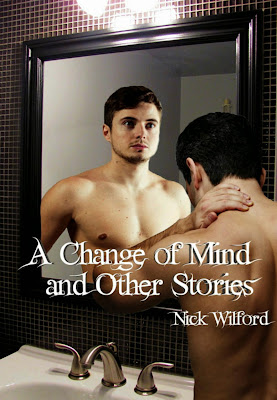 Nick took time out of his busy schedule to answer one, simple question for me:

Me: If you had to pick one song that best captures the essence of A CHANGE OF MIND AND OTHER STORIES, what would it be and why?

Nick: I don't normally write with music in mind, but I kept coming back to Radiohead's "Karma Police". Apart from being a great song, I think the lyrics fit with my novella quite well. The chorus to me means "this is what you get if you mess with who we are, i.e. try to be someone you're not" ... and of course Reuben "lost himself" too!


Nick: It's quite an odd but cool little video. For an extra fun fact, the frontman Thom Yorke, who was the only band member to appear in the video, almost died of carbon monoxide poisoning from sitting in the car...

Blurb:
A Change of Mind and Other Stories consists of a novella, four short stories and one flash fiction piece. This collection puts the extremes of human behaviour under the microscope with the help of lashings of dark humour, and includes four pieces previously published in Writer’s Muse magazine. In A Change of Mind, Reuben is an office worker so meek and mild he puts up with daily bullying from his boorish male colleagues as if it’s just a normal part of his day. But when a stranger points him in the direction of a surgeon offering a revolutionary new procedure, he can’t pass up the chance to turn his life around. But this isn’t your average surgeon. For a start, he operates alone in a small room above a mechanic’s. And he promises to alter his patients’ personality so they can be anything they want to be… In Marissa, a man who is determined to find evidence of his girlfriend’s infidelity ends up wondering if he should have left well alone. The Dog God finds a chink in the armour of a man with a megalomaniacal desire to take over the world. In The Insomniac, a man who leads an obsessively regimented lifestyle on one hour’s sleep a night finds a disruption to his routine doesn’t work for him. Hole In One sees a dedicated golfer achieving a lifelong ambition. The Loner ends the collection on a note of hope as two family members try to rebuild their lives after they are torn apart by jealousy.

Purchase Links:
Amazon US / Amazon UK / Smashwords / Barnes & Noble / KOBO
Snatch it up at 99 cent Release Day pricing TODAY only
add to your list at Goodreads

Nick Wilford is a writer and stay-at-home dad. Once a journalist, he now makes use of those rare times when the house is quiet to explore the realms of fiction, with a little freelance editing and formatting thrown in. When not working he can usually be found spending time with his family or cleaning something. He has four short stories published in Writer’s Muse magazine. Nick is also the editor of Overcoming Adversity: An Anthology for Andrew. Visit him at his blog or connect with him on Twitter or Goodreads.

Thanks so much for helping out with my launch today, Nicki! I totally recommend everyone to pick up the album this song comes from too, OK Computer. It's one of the greats.

Wow! These sound amazing! Very tense and exciting. Congratulations to Nick on his release!