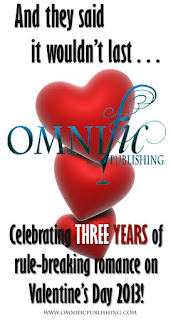 Today is not only Valentine's Day, it's the Three Year Anniversary of  Omnific Publishing. As one of the authors to have a short story included in the company's debut release, A Valentine Anthology, it also marks the anniversary of my first published work. (And Jennifer Lane's birthday---Happy Birthday, Jen!)

Pretty crazy and pretty exciting. Five novels were released on February 16, 2010, and the company now has 67 titles in its catalog. Many of them are shooting up the charts, and in 2012 one series shot all the way off and onto a six-figure deal at a major publisher. BREAKING NEWS: Make that TWO serieses sold to major publishers. Read about it here.

But even better than that, Omnific is adapting to this growth & success  in a way that allows it to stick to its primary objective: a quality product in the form of unique, romantic stories that have been skillfully and thoroughly edited and presented with beautiful covers and interior design. Because that's what readers deserve.

To celebrate, Omnific Publishing is hosting a Kindle giveaway from February 14-16---THREE Kindles, each loaded with books  from one full year of the publisher's existence. Check out the full listing of books and enter to win here.  Aaaaaand that's not all!  Today through Saturday, the company's debut novels (Three Daves, Seers of Light, Passion Fish, and Boycotts & Barflies) and A Valentine Anthology are on sale for 99 cents in Kindle and Nook.  So go on, be a love and tell all your friends!

Here are some Tweetables to make spreading the word easy
(or you can simply reTweet from my place):

You don't think I'm going to let you leave this celebration without a party favor, do you?  I made y'all a special mix tape for this fine Valentine's Day. Fourteen songs, all 80s & all with "Love" in the title. Enjoy! 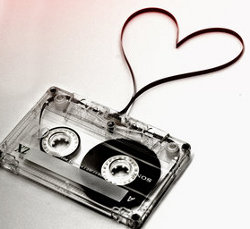 Thank you Back to the 80s for a list of 80 songs from which to choose.

Thanks for the shoutout and happy anniversary on your first publication!

Neat!! And I love your song choices. Love Cats!!

Wow, this is great. Congratulations, Nicki! And Omnific! Love the playlist too.
Psychedelic Furs are my fave.

ANd thanks for the PLAYLIST!

Congratulations, and well done for not belabouring the Valentine theme.

I love all of those songs! Good choices

Three years! Times flies. I still remembering reading about this on twilighted. Congrats!

Happy Anniversary Omnific, congrats for three! I could use a new kindle as I lost mine can't find it anywhere.

Thanks for having this blog.
roya-clan@sbcglobal.net